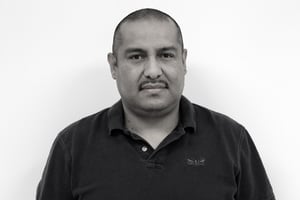 It’s not every day you find someone with as much drive, devotion, and passion as Gil Sanchez. Hailing from the Southside of Chicago, Gil is the master of a balanced life - and not just because he supports the White Sox and Cubs simultaneously! Gil takes equal pride in being American and Mexican. His family moved to Zamora, Michoacán when he was nine years old, but he returned to Chicago on his own at 18. After bouncing between Chicago and Mexico for work, in 2003 Gil started his creative werks career. For the last 15 years our team has seen that his benevolence is matched only by his extraordinary work ethic. Gil and his wife live in the Chicago suburbs with their four children, enjoying movies, bike rides, and watching any sports he can! Read on to learn more about one of our most collaborative, hard-working team members here at creative werks!

Where is your favorite place to go on a weekday afternoon, when you have no plans or obligations?
Bike riding! I usually go on a three to five mile bike ride with the family or even just with my son. It doesn’t sound like a lot, but at my age? Hey, it’s a good workout.
If you could be stuck at an age forever, what age would you be?
When I was 12 years old, I had no obligations and was playing soccer every day with my friends!
Do you have any irrational fears?
I have a fear of falling down a cliff while driving an automobile or a bike.
Where will creative werks be in 10 years?
Opening their 7th building, in Guadalajara Mexico.
Who inspires you most? Who do you aspire to be like and why?
My greatest inspiration is my grandfather Federico, because he is the kindest, most honest person I have ever known. Also, since we are in the middle of the World Cup, I would aspire to be like Pele, because he is a leader and does for a living what it is he loves the most. It's the same feeling for me here at cw.
If you won a free plane ticket to go anywhere, where would you go?
I would go to Egypt and see the Pyramids of Giza. The fact that humans built these crazy structures as well as the Sphinx really intrigues me.
Who would play you in a movie?
I’d say Gael Garcia.
What’s one of your favorite creative werks memories?
When we attended the Cubs game on the rooftops and I saw Jim dancing on the bus on our way back.
Tell us your most bizarre talent!
Head dribbling: I can bounce a soccer ball 30 times in a row.
If you created a slogan for your life, what would it be?
It is never late to learn new stuff.