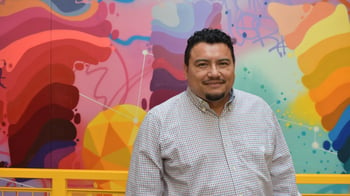 When Angel Garcia left his job as an Insurance Underwriter to rejoin the world of IT, the longtime Chicagoan wasn't expecting to land a job in the suburbs. But we couldn't be happier that he found his way to creative werks in 2017, becoming one of our valued members of the IT team. Angel and his family moved from Guatemala to Chicago when he was 10 years old and the city grew on him quickly. He has lived in the city limits since that time, attending the College Office of Technology for a degree in Information Technology. He also met and married his wife of 24 years, and they enjoy living near their eight children. When he's not tinkering on the computer, Angel watches his sons play soccer, supports Chicago teams (Cubs, Fire, Bears, Blackhawks, Red Stars, and, the Bulls), and kicks back to watch movies with the family. A cinephile, Angel is pretty confident he's seen more action films than anyone he knows! Read on to learn more about our amenable IT guy, Angel!

What’s the most interesting piece of trivia you know?

Did you know that only female mosquitos bite? The males go for flower nectar instead.

What longshot have you taken that’s really paid off?

Going back to IT after I was thinking of doing something else. It was a complete 180 but I'm so glad I did it!

If you had to choose one cause to dedicate your life to, what would it be and why?

I would choose immigration; it's so misunderstood and I'd like to help.

Well... my mom was very strict, so I would be very polite.

If you weren’t in IT here at cw, what do you think you’d be doing?

I think it would have been pretty cool to be a pilot.

No, nothing. I mean, only snakes - but I don't think that's irrational.

How many times do you hit snooze in the morning?

I never used to need it, but lately I hit that button twice a morning.

Is there a documentary, album, or book that really changed the way you think about something?

When They See Us. It changed the way I think because we as parents have to be more mindful of our kids' rights when they encounter police.

My first impression was, 'Wow! This is a nice place to work!'

Tell us your most bizarre talent!

I don't think I have any hidden talents, but I was good at soccer when I was younger. I'm hoping to play on my sister's co-ed team.